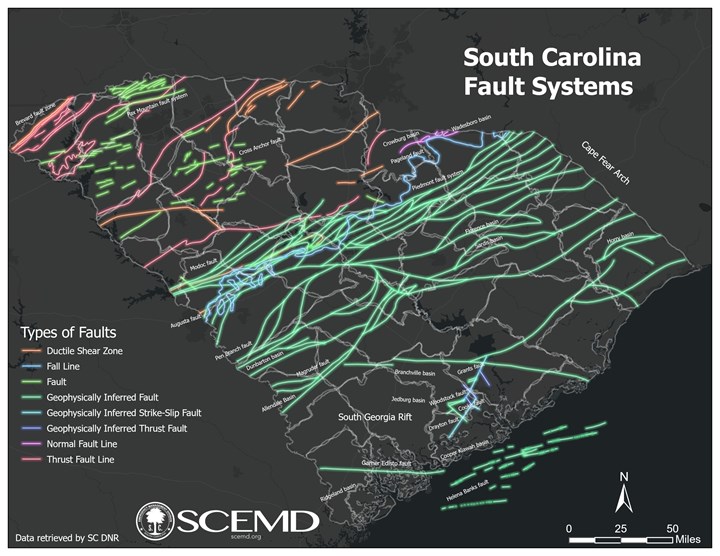 Geologists studying the ongoing swarm of earthquakes in Kershaw County believe this may be the longest period of successive earthquake activity in the state’s recorded history. An earthquake swarm is a sequence of seismic events occurring in a local area within a relatively short period of time. This swarm began December 27, 2021, with a magnitude 3.3 earthquake centered near Elgin, South Carolina. Since then, 47 low-magnitude earthquakes have occurred in the Elgin-Lugoff area, with the strongest being a magnitude 3.6 on June 29. Seismologists believe these low-magnitude quakes are not indicators of larger earthquakes to come.

South Carolina has experienced thousands of earthquakes like these throughout the state’s history, according to State Geologist Scott Howard. What makes these unique is the length of time over which they are occurring. “These earthquakes are now the longest running series of earthquakes in recent history,” Howard said. “Unlike earthquake swarms occurring elsewhere in the country, these have been low in magnitude and haven’t posed a hazard to people, fortunately.”

“The Piedmont Fault System is made up of several smaller fault lines that stretch across the middle of South Carolina.” explained Dr. Steven C. Jaume’ with the College of Charleston’s Department of Geology and Environmental Geosciences Department, “The first earthquake on December 27 appears to be the one that started this swarm in Kershaw County. When an earthquake occurs in a region where there hasn’t been much activity over a long period of time, we can expect similar earthquakes to occur in that general area for the foreseeable future.”

These earthquakes are not related to mining activity or any other human cause, according to both Howard and Juame’. The South Carolina Emergency Management Division encourages all residents to stay informed about and be prepared for earthquake activity in the state.

The epicenter of the largest earthquake ever recorded along the eastern United States seaboard was just outside of Charleston on August 31, 1886. The 7.3 magnitude quake devastated the region and was felt from Chicago to Cuba. According to a study commissioned by SCEMD, an earthquake of similar magnitude occurring today would result in tremendous loss of life, severe property damage and extreme economic loss. Results of the study are detailed in the South Carolina Earthquake Guide.

Residents can keep track of all earthquakes in South Carolina and even get notified when one occurs using the earthquake map tools located within the SC Emergency Manager mobile app, available in the App Store and on Google Play.

Additional earthquake resources are available through The Great Southeast Shakeout and through the South Carolina Geological Survey.