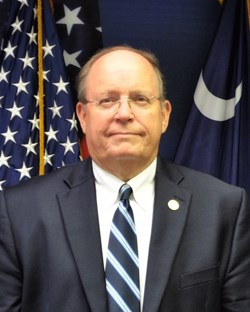 Kim Stenson was named Director of the South Carolina Emergency Management Division of the Adjutant General’s Office in June 2013. Under his direction, the Division provides oversight and coordination for emergency and disaster consequence management planning, and response and recovery operations for the State of South Carolina. Mr. Stenson is also responsible for coordination with emergency managers at the local and national levels.

Prior to joining SCEMD in 1998, Mr. Stenson served as an infantry officer in the U.S. Army. While in the Army, he served in a variety of assignments in the United States, Europe, Asia and the Middle East including combat service during the First Gulf War.

Following his retirement from the U.S. Army, Mr. Stenson joined SCEMD, where he served successively as the Manager, Natural Hazards Plans; Chief, Preparedness; Chief, Preparedness and Recovery; and Chief of Staff, an appointment in 2008. He has been a key player in the Division’s responses to major events, most notably for the October 2015 heavy rains and severe flooding incident which resulted in the largest statewide responses since Hurricane Hugo in 1989, Hurricane Matthew in 2016, Hurricane Irma in 2017, Hurricane Florence in 2018, and Hurricane Dorian in 2019.

Mr. Stenson’s military awards and decorations include the Bronze Star Medal and the Combat Infantry Badge. In 2016, he was awarded the Order of the Palmetto, South Carolina’s highest civilian honor, by Governor Nikki Haley.